The DVD or CD install that came with your Mac; A Copy of Aircrack-ng 1.1 (just download, Do NOT unzip); A Copy of Macports, (OPTIONAL for Install #2) you can download either directly from the website or choose between the following two: MacPorts for OS X 10.6 (Snow Leopard); MacPorts for OS X 10.5 (Leopard); The Admin rights on your Mac, or at least the Admin Password.

Aireplay-ng is used for replay attacks and as packet injector. It can be de-authenticate users from their APs to capture handshakes.

Aircrack-ng is used to attack WPA/WEP wireless protocols in order to find the key.

Aircrack-ng is easy to install in Ubuntu using APT. Just type the following command and this will install all tools available in Aircrack-ng suite.

In this article, we’ll take a quick look at how to use aircrack-ng to crack an encrypted wireless network (TR1CKST3R in this example) to find the password.

First of all, list out all available wireless cards connected to your PC using ‘iwconfig’ command.

We’ll use ‘wlxc83a35cb4546’ named wireless card for this tutorial (This might be different in your case). Now, kill all the processes running on wireless card using airmon-ng.

Then, use airodump-ng to see nearby Wireless Access Points and their properties.

You can narrow down search using MAC (–bssid) and channel (-c) filters. To capture handshake (Handshake contains encrypted password), we need to save our packets somewhere using “–write” option. Type,

Now, we need to de-authenticate every device from this Access Point using Aireplay-ng utility. Write

Handshake is stored in ‘/tmp/’ directory, and contains encrypted password that can be brute forced offline using a dictionary. To crack the password, we’ll be using Aircrack-ng. Type

Aircrack-ng will go through the list of passwords, and if found, it’ll display the password used as key.

Aircrack-ng can be used to audit Wireless Security or to crack forgotten passwords. There are some other similar tools available for this purpose like Kismet but aircrack-ng is better known for good support, versatility and having wide range of tools. It has easy to use Command line interface which can easily be automated using any scripting language like Python.

If you want to know how to hack WiFi access point – just read this step by step aircrack-ng tutorial, run the verified commands and hack WiFi password easily.

With the help a these commands you will be able to hack WiFi AP (access points) that use WPA/WPA2-PSK (pre-shared key) encryption.

The basis of this method of hacking WiFi lies in capturing of the WPA/WPA2 authentication handshake and then cracking the PSK using aircrack-ng.

How to hack WiFi – the action plan: 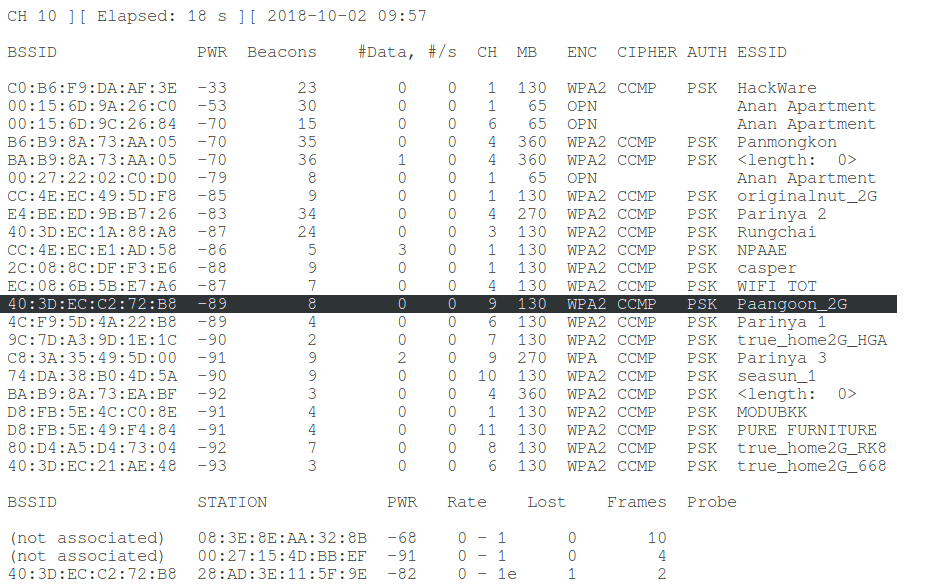 The Latest Version Only: If you really want to hack WiFi – do not install the old aircrack-ng from your OS repositories. Download and compile the latest version manually.

Ensure that you have installed the latest version of aircrack-ng:

Now it is required to start the wireless interface in monitor mode.

What is especially important for us – monitor mode allows packets to be captured without having to associate with an access point.

Find and stop all the processes that use the wireless interface and may cause troubles: In the example above the airmon-ng has created a new wireless interface called mon0 and enabled on it monitor mode.

So the correct interface name to use in the next parts of this tutorial is the mon0.

Cool Tip: Want to have some “fun”? Create a Linux fork bomb! One small string that is able to hang the whole system! Read more →

Now, when our wireless adapter is in monitor mode, we have a capability to see all the wireless traffic that passes by in the air.

This can be done with the airodump-ng command:

Start the airodump-ng on AP channel with the filter for BSSID to collect the authentication handshake for the access point we are interested in:

If you want to speed up this process – go to the step #4 and try to force wireless client reauthentication.

This means that the airodump-ng has successfully captured the handshake:

Cool Tip: Want to stay anonymous? Learn how to use PROXY on the Linux command line. Read more →

If you can’t wait till airodump-ng captures a handshake, you can send a message to the wireless client saying that it is no longer associated with the AP.

The wireless client will then hopefully reauthenticate with the AP and we’ll capture the authentication handshake.

Send directed deauth (attack is more effective when it is targeted):

Unfortunately there is no way except brute force to break WPA/WPA2-PSK encryption.

And remember that this type of attack is only as good as your password dictionary.

Crack the WPA/WPA2-PSK with the following command: